The long-predicted soft landing for condominium markets in cities across Canada is in sight for 2015, with modest gains in sales and prices in most major Canadian cities, according to the latest Conference Board of Canada condo report released by Genworth Canada. The Winter 2015 Metropolitan Condo Outlook forecasts positive condominium price appreciation in most major cities, with the exception of Calgary and Edmonton which are expected to experience some softening as a result of lower oil prices. 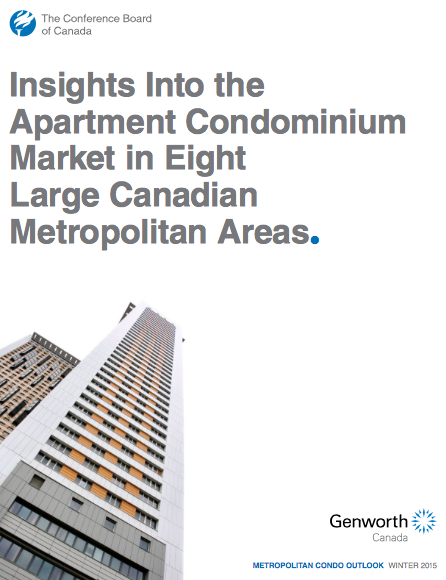 "From a national perspective, these findings support an overall balanced outlook on Canada's condo market for 2015, with the exception of certain oil-exposed regions," said Stuart Levings, President and CEO of Genworth Canada.  "We continue to see evidence that population growth and employment remain key drivers of demand for condos in urban centres."

Divergent underlying economic conditions help to explain the majority of the regional differences in sales and prices.   According to the report, Toronto and Vancouver will see the strongest GDP advances, while economic growth will be weakest in Calgary and Edmonton. This uneven economic backdrop, combined with growing inventories in some markets, is expected to trim starts in all but Quebec City, Ottawa, Vancouver and Victoria. Still, all eight cities are predicted to experience decent population growth over the forecast period, providing continued support for condominiums.

"While the health of apartment condominium markets varies significantly by region, nowhere do we see a bubble about to burst," said Robin Wiebe, Senior Economist at the Centre for Municipal Studies at The Conference Board of Canada.

Resale prices for condominiums are expected to rise modestly in most of the eight cities during 2015, but drop in Calgary and Edmonton. British Columbia is poised to do well with resale price increases of 2.1% and 4.5% projected for Vancouver and Victoria respectively.